Started end of August 2019, will live on forever in my heart.

Cute animals, salaryperson culture, and death metal? Sign me up. Also, I wish the startups I worked for had noodle slides. That would be a lot healthier than the mounds of candy they usually end up providing employees. The Christmas episode would probably pair nicely with a fine “Nosedive” from Black Mirror. Season 2 is awesome as well. Also, I never thought I’d have a hankering to cosplay as a Sanrio character, but I kinda want to do a punk Haida for an anime con: 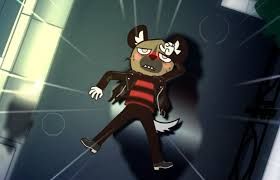 I also have the original 100 Sanrio shorts to watch.

Both mellow and heavy. A great album to listen to on my return to work.

Melodic post-hardcore, a little funky and mellow, another good choice for this morning. Also, very naughty. Don’t put this into your work Slack’s #music channel.

Google’s recommendations for the day:

Melodic and crunchy, a good album for this morning.

I don’t listen to a lot of rap, but I think I’ll be going through Mega Ran’s catalog a bit more.

Monarch - Beyond the Blue Sky

Trippy. I was kinda zoning out half-napping when it was on and it was great for that. It’ll need another listen when I’m more awake.

Pretty great indie alternative music. Eclectic and interesting. Keep Going is the standout track for me.

A serious, cautionary tale about the dangers of autonomous vehicles and artificial intelligence.

That’s not the synopsis I would give for Maximum Overdrive. This weird Stephen King-directed film is quite the production, that’s for sure. 🚛🚛

Puppet aliens leave a literal arm cannon around for a fan of AOR and Southern Rock to find and, subsequently, go crazy with and start shooting cars and planes and stuff.

Sometimes I forget what media I’ve seen/read/listened to and what I thought of it. Hopefully this will help me remember.